Why hello there my stochastic, sagacious Bookbaggers!

Welcome to the 4th update of my personal reading challenges, Short and Sweet and 1000+ Pages of Epic Fantasy, and a darn good update it is, if I do say so myself!

Lets start off as usual with: 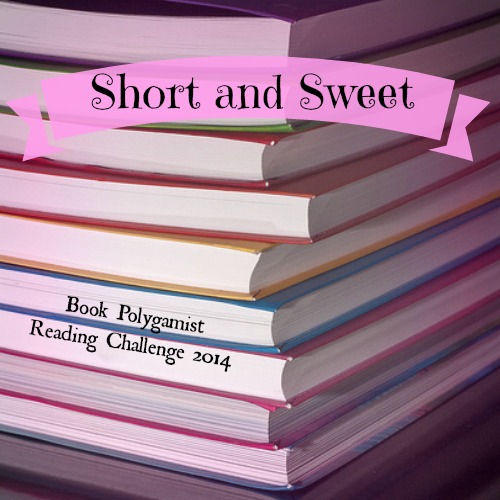 Not much happened in this challenge (it’s the other one which warranted the darn good statement) but I’ll do a mini mighty numbered list anyway:

As I haven’t found any new books under 200 pages, the contenders remain the same:

I Am Legend by Richard Matheson

The Illustrated Eric by Terry Pratchett (writer) and Josh Kirby

Now onto the other challenge which was really successful last week: 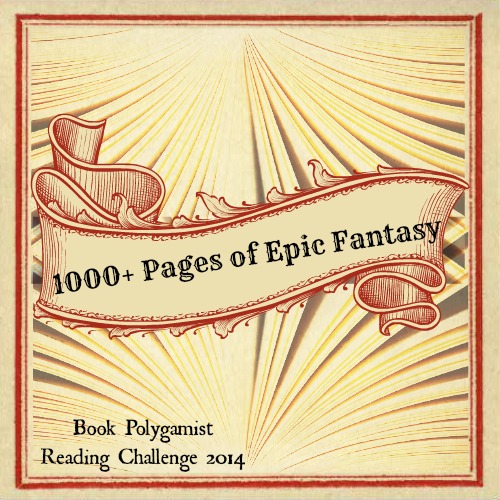 On Sunday I had my usual schedule of reading interspersed with “important” stuff like laundry and dishes, but instead of just reading a little of my two gigantic fantasy tomes, I got caught up and a tad carried away:

Soooo… I definitely reached my quota…and made up for the week of nothing….and then some O.O I honestly didn’t mean to read as much as I did of either of these books, but they’re both getting so exciting that when I reached the end of the chapter I thought “oh I’ll just do one more and then wash the dishes”… and then I came back to it after the dishes anyway 😛

Besides being engrossed in huge fantasy books and a zombie prostitute story, I also read FreakAngels #2 by Warren Ellis (writer) and Paul Duffield (artist), which has been sitting on my pile looking sad since the end of my break

It was as awesome as I expected from the first volume, and even more so because a previously unnamed member of the group was introduced, and she is a hilarious ball-busting no-nonsense sort of chick, which I love, and another character revealed a new ability she had been practicing, which was very cool. I’ll have to track down the other volumes of this series, or maybe just succumb to temptation and start reading the free online version, even though I will likely also buy the hard copies for my burgeoning comic collection 🙂

Hinterkind: The Waking World Volume 1 by Ian Edginton (writer), Francesco Trifogli (artist), and Greg Tocchini (cover artist). I also randomly picked two comics out of my 20-odd wodge of Free Comic Book Day comics – Worlds of Aspen 2014, which has two previews of upcoming stories in it – a fairy-tale adventure series called Damsels in Excess on one side and an action-adventure called The ZooHunters on the flip side; and KaBOOM! Summer Blast which has stories from Peanuts, Garfield, Adventure Time, and  Regular Show among others.

I haven’t started any of them yet,but since this weekend is meant to be a rainy one, I will probably find myself holed up inside with a blanket and all my delicious reads….mmmmm 🙂 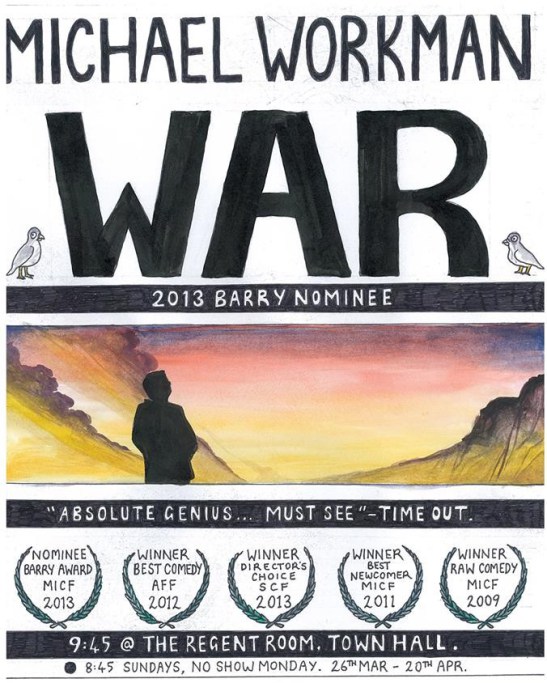 Michal Workman’s tour poster for “War” from wendylikesstories.com click on the image to read her excellent review of the show, as well as one of David O’Doherty’s

I had previously only seen one show of his – “Mercy” – on Warehouse Comedy, a show that has featured many Australian and international comedians performing in a converted warehouse, but it was so interesting, unique and affecting that I’ve watched it three times – and every time I saw it was to be repeated I was excited to revisit Michael Workman’s amazing story-telling and quirky style. Sarah had never heard of Michael Workman nor seen any of his comedy, but after watching a video teaser of “Mercy” she agreed to go with me, and we had a wonderful time 🙂

On that note I’m off for now Bookbaggers, but I may as well leave you with that same teaser Sarah watched:

Tune in next week for another, hopefully just as successful update, and until then:

And since it’s World Turtle Day here’s this little guy as a bonus: 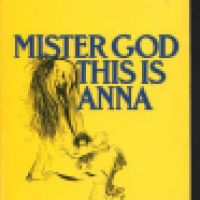 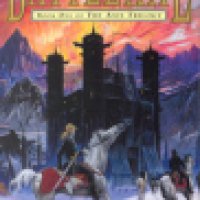 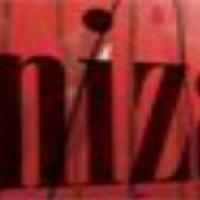